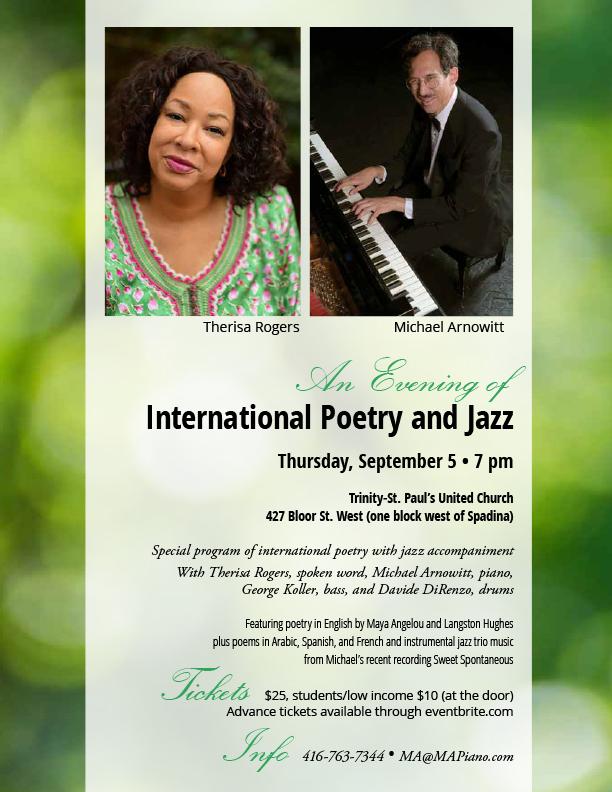 An Evening of International Poetry and Jazz

Tickets $25 general admission in advance or at the door
Special rush tickets $10 for students/low income people, at the door only
Click hereto reach the direct webpage to purchase advance tickets on Eventbrite.com

Longer description:
A special concert of international poetry with jazz accompaniment will be presented Thursday, September 5 at 7 pm at Trinity-St. Paul’s United Church in Toronto. Classic poems in English, French, Spanish, and Arabic will all be read in the original languages, creating a colourful journey through the thoughts and emotions of poets from a half-dozen different countries from around the world. American performers Therisa Rogers, spoken word and Michael Arnowitt, piano will be joined by two of Toronto’s best jazz musicians, George Koller on bass and Davide DiRenzo on drums.

The program features poems from two great African-American poets both with deep personal links to the music world. Langston Hughes, who often wrote his poems in jazz and blues clubs, will be represented by works including “Crossing,” with its powerful images of the stream, the prairie, and the mountaintop, evoking the place of true freedom and independence not yet reached. Maya Angelou’s celebrated poem “Still I Rise” presents a unique mixture of defiance, quirkiness, and strength-giving hope that has sustained countless readers through the generations.

Poems in French will include selections by the late 19th century Quebec poet Emile Nelligan, one of the most beloved French Canadian poets of all time. An iconic figure in Quebec today, Nelligan’s sensitive and musical poems tragically all date from when he was 16 to 19 years old. Another Quebec poet, Michele Lalonde, wrote the most dramatic poem on the program, the provocative 1968 “Speak White.” The title’s racist taunt, borrowed from American slavemasters, was used against those who spoke French in public spaces to make them feel inferior. Lalonde’s masterpiece draws connections to anti-colonial liberation movements from world history far from Quebec.

Other poems on this diverse program include sonnets in Spanish by Pablo neruda of Chile and the Mexican nun Sor Juana Ines de la Cruz, who wrote brilliant poetry in the 1600’s, and poems in Arabic by the great Syrian-born poet Adonis.

The concert also features some instrumental jazz trio selections from Michael Arnowitt’s recent recording release Sweet Spontaneous, along with his creative arrangements of the jazz standards Autumn Leaves, There Will Never Be Another You, and the Beatles’ Eleanor Rigby.

Trinity-St. Paul’s United Church is located at 427 Bloor Street West, one block west of Spadina. Tickets are $25, with $10 students/low income rush tickets at the door. Advance tickets available through eventbrite.com. For further information, e-mail MA at MAPiano.com or call 416-763-7344.

Back to Home Page